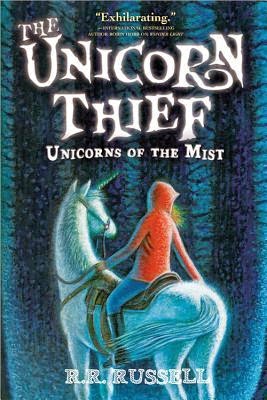 Summary from Goodreads:  Danger lurks in the mist.

Twig and Ben are unicorn riders--guardians whose job it is to keep the last free unicorn herd safe. But a new danger is threatening the beautiful, mysterious creatures of Lonehorn Island. A thief from Terracornus has snuck onto the misty island and stolen Ben's loyal unicorn, Indy. There's only one path for Ben and Twig--straight into the secret, shadowy heart of the island and through the passage to Terracornus.

But their rescue mission is unexpectedly complicated by a secret Ben has been hiding. A secret about the Queen of Terracornus who has enslaved all the unicorns of Ben's homeland. A secret that could save them all--or start a war.

The Unicorn Thief is a really fun and adventurous follow-up to Wonderlight!  My 10-year-old daughter and I have both really enjoyed this series, and we can't wait to read more!

What I loved:
The negatives:
I highly recommend  this series to kids who love adventurous books.  My daughter and I are looking forward to reading more!  I give this 4.5/5 stars.

***Disclosure: This book was provided to me by the publisher (Sourcebooks Jabberwocky) in exchange for an honest review. No other compensation was given. All opinions are my own***

R.R. Russell lives with her family in the Pacific Northwest. She grew up traveling the world as an army brat and now travels the country as a coach with a non-profit judo club. She loves to read and draw, and like Twig, once spent a lot of time sketching unicorns.

a Rafflecopter giveaway
Posted by Nicole @ Feed Your Fiction Addiction at 9:25 AM