My daughter and I originally wrote this review and it was posted as a guest post on Mother, Daughter & Son Book Reviews.  Since I'm reviewing book #2 in the series tomorrow, I thought I'd post the review for book #1 here. 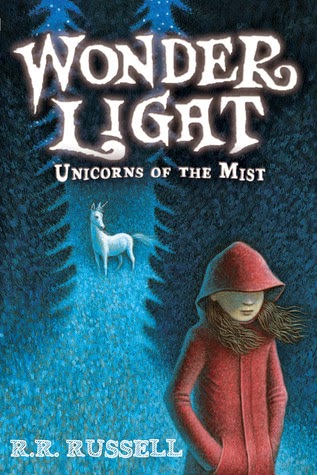 
Summary from Goodreads: Deep in the heart of a mist-shrouded island, an impossible secret is about to be discovered.

Twig is used to feeling unwanted. Sent to live on a pony ranch for "troubled" girls on a misty, haunted island, Twig is about to discover the impossible — someone who needs her.
Jolted awake from a bad dream, Twig follows the desperate whinny of a terrified horse out to the stables. There in the straw is a bleating little scrap of moonbeam. A silver-white filly with cloven hooves and a tiny, spiraling horn.

Now Twig knows what secret is hiding in the island's mist: the last free unicorn herd. And a mysterious boy named Ben who insists that this impossible creature is now Twig's to care for. That she needs Twig's love and protection. Because there's something out there in the deep, dense shadows that's hunting for them...

1. What is the story about? A girl named Twig was sent to an island for troubled girls. It was a pony ranch and it has many secrets. One morning, she wakes up to hear howling in the stables and sees a unicorn and a mysterious boy. He tells Twig she has to guard the unicorn because there is something out there hunting them. Twig helps protect the unicorns.

2. What do you think of the cover and/or the pictures in the book? I like the cover of the book because it shows how dark and misty the island is.
3. Who is/are the main character(s)? Can you relate to them? The main character of the book is Twig. I like her because she is very kind and adventurous.
4. What is your favorite part of the story? My favorite thing that happened in the book was when Wonder was fighting Dagger.

5. What is your least favorite part of the story? My least favorite part of the book was the very beginning where she had not met Wild Light or Ben yet.
6. How did the story make you feel? The story made me feel excited and I did not want to stop reading.
7. What lessons did you learn from this story? I am not sure what I learned.
8. Who do you think would like this book? I think my mom and brother and some other kids who like fantasy books would like this book.
Daughter's Rating: ★★★★★

MOM SAYS
What it’s about: Wonder Light centers around a 12-year-old girl named Twig who is sent to an island ranch for troubled girls because of difficulties fitting in with her new step-family. (She is accused of trying to hurt her step-sister, but you don’t find out until near the end of the book what happened). The island holds many mysteries – not the least of which is the “ghost boy” who seems to roam the forest. One night, Twig is awakened by strange howling sounds and finds the boy out at the stables – along with a unicorn! When the unicorn has a foal and is then killed by a strange dark enemy in the forest, Twig has to care for the unicorn foal herself. She soon finds herself in a battle to save the last remaining unicorns – but first she must find the faith in herself to overcome her own fears and insecurities.
My thoughts:  I really enjoyed this book. While the story centers around unicorns and mysteries, it’s really about a little girl’s journey to understanding her own self-worth.
I would highly recommend reading this book with your child and discussing it with them. There are some heavy issues presented that my daughter didn’t really understand until I talked them through with her. Twig’s mother was put in prison because of drug issues and Twig was sent to live with her father. However, Twig’s father was in the military, so he’s not really there to help Twig through the transition. When Twig is accused of hurting her step-sister, she feels like this just reinforces that she is “bad” like her mother and doesn’t feel like her father can love her any more. Because of this, she withdraws from everyone in her family. Thinking that Twig needs help (and is possibly dangerous), Twig’s step-mother sends her to the ranch to live. All of these things are woven into the story, but they are sometimes alluded to in ways that my nine-year-old didn’t really understand on her own (especially the parts about Twig’s mom and dad – she didn’t understand that the mother was in prison or that the father was in the army – because it just says he’s “deployed” and she didn’t know what that word meant). Even though these are big issues, they help to create a really touching story of a girl learning to have faith in herself.
My bottom line:  I thought that this book was excellent and really enjoyed reading it. My daughter loved the book because of the mystery and adventure of the unicorns and I loved it because it was a touching story of a girl’s self-discovery. While Amazon says that the book is geared toward ages 9+, I would recommend a bit older if you want your child to truly appreciate the story of redemption that is presented.
Mom's Rating: ★★★★☆
Posted by Nicole @ Feed Your Fiction Addiction at 2:05 PM