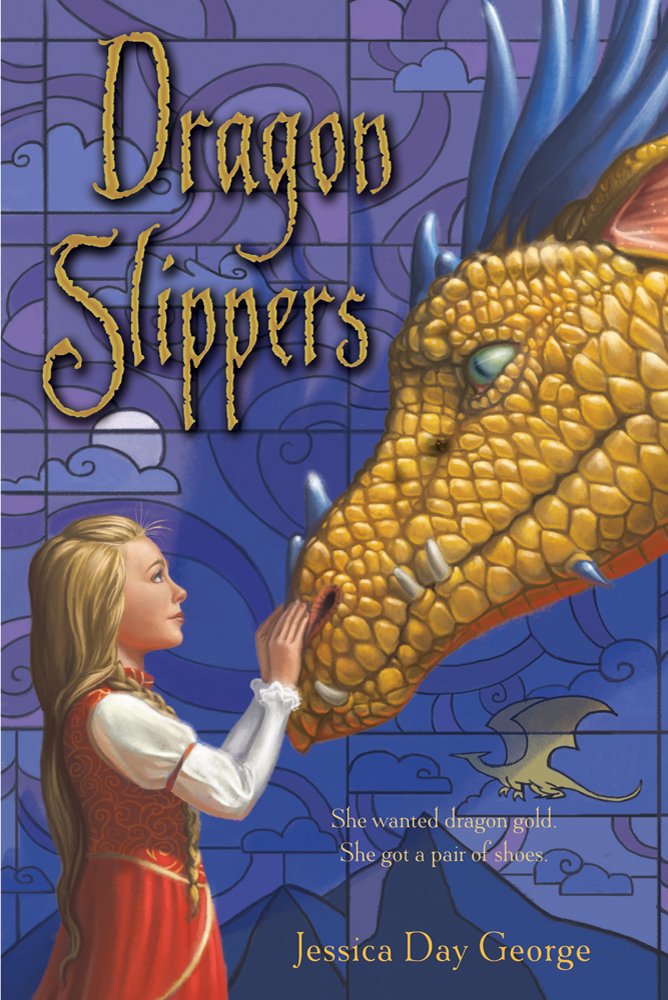 
Summary from Goodreads: (Book #1 - Dragon Slippers) Many stories tell of damsels in distress, who are rescued from the clutches of fire-breathing dragons by knights in shining armor, and swept off to live happily ever after.

Unfortunately, this is not one of those stories.

True, when Creel's aunt suggests sacrificing her to the local dragon, it is with the hope that the knight will marry Creel and that everyone (aunt and family included) will benefit handsomely. Yet it's Creel who talks her way out of the dragon's clutches. And it's Creel who walks for days on end to seek her fortune in the king's city with only a bit of embroidery thread and a strange pair of slippers in her possession.

But even Creel could not have guessed the outcome of this tale. For in a country on the verge of war, Creel unknowingly possesses not just any pair of shoes, but a tool that could be used to save her kingdom…or destroy it.

Dragon Slippers is a fun fantasy series with a strong, talented, intelligent female protagonist - a great example for young girls.  As the summary says, Creel doesn't wait to be rescued, she takes her life into her own hands and makes a name for herself based on her own merits. Along the way, she befriends a dragon and finds herself at the center of a war that only she can end. The second book in the series has Creel and her friends (both dragon and human) saving the kingdom from an army of enchanted dragons. In the final book in the trilogy, the dragon queen is kidnapped and Creel and her friends must rescue her.

The first book in the series will probably appeal to girls more than it will to boys - especially in the middle of the book. The book starts out with adventure as Cree is sacrificed to a dragon and it ends with quite a bit of excitement with the war, but the middle of the book focuses on Creel making her way as an embroiderer.  The second two books in the series, however, are much more action-oriented throughout and will definitely appeal to both boys and girls. There is a romance in the books too, which will appeal to older kids (but is completely appropriate for younger readers as well). My 10-year-old son and 8-year-old daughter both really enjoyed the whole series and I loved reading it along with them!
4.5/5 stars
Posted by Nicole @ Feed Your Fiction Addiction at 11:00 AM